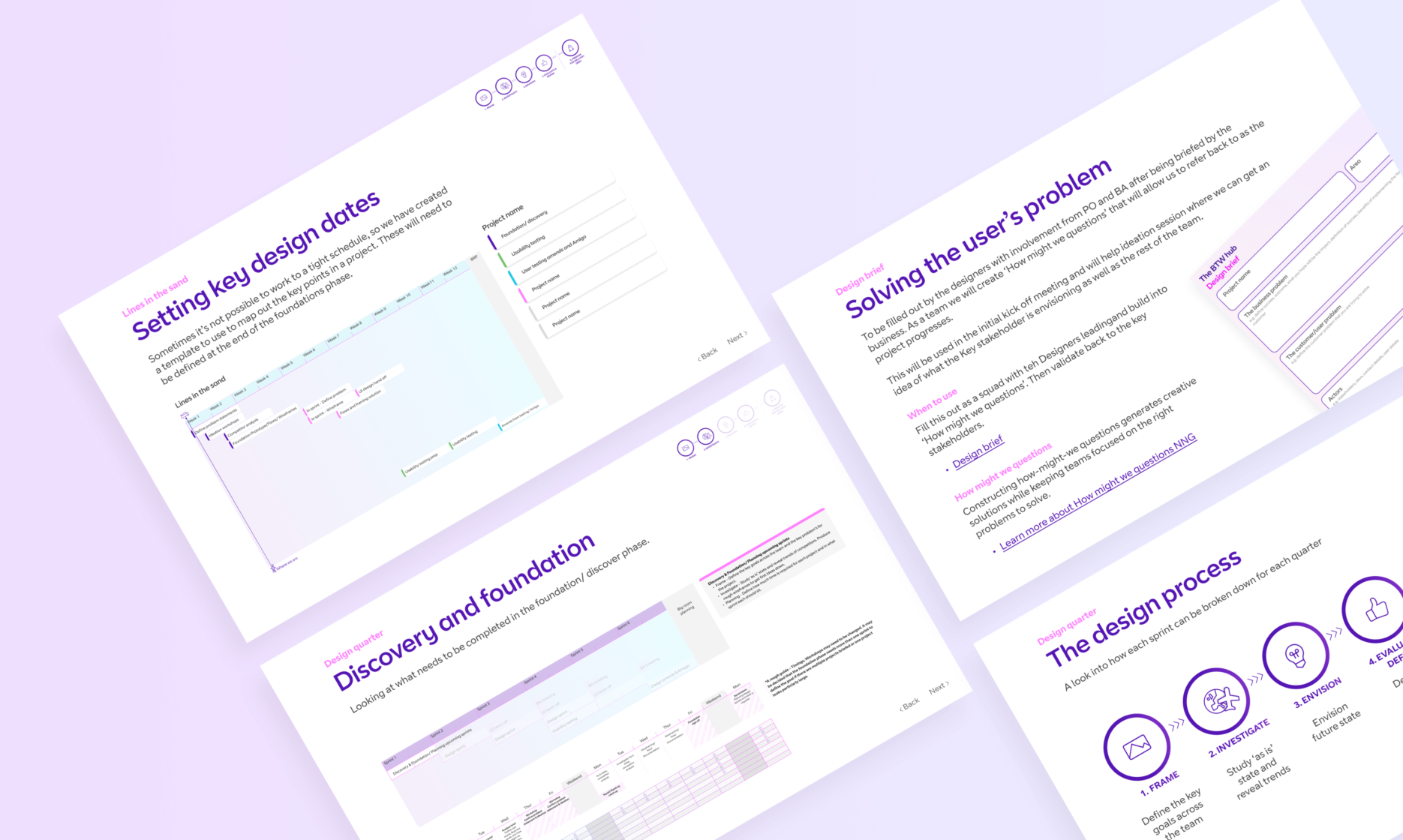 Skills used: Leading workshops, UI design, Team leadership
The problem: Among the tribe there wasn’t really a process to truly integrate design into a sprint plan. There was also an issue with with trying to really define a true design brief from the key stakeholders.
Solution: Creating a defined sprint structure to give an idea of what workshops should be included and who should be involved. As well as working with my peers to create a couple of worksheets that could be used to help define the brief and to take into big room planning.

Working with the PO we found that we need to create our own design process. With key stakeholders coming to our team with solutions, which is fine, but we needed a way to step back a few steps to make sure we understood the business goals, and the user needs. As well as this we wanted to set in stone some ceremony and define what a sprint would look like, to give an idea to the Key stakeholders of the work that was involved to launch a feature to market.

The first step was to get some examples of what had already been used within EPAM on other project to get and get an idea of what has worked in the past. Another step was to see what other process were readily available from other digital companies.

The next step was to get a first iteration down. From this I took it to a couple of directors within EPAM to see if there was anything I had missed along with getting it in front of other designers and content designers within the squad to get their thoughts. A few good points was to add swim lanes to allow people to readily see when they they were need it various meetings. Along with creating a area to track when key deliverables were required, as inevitably the sign off meetings may fall out side of sprints as key people become unable to attend because of their busy schedule.

The final solution I put a meeting together to run through the initial thoughts with our PO, BA, content teams to get their feedback. With an emphasis that this is to give an idea and can be changed and moved around as and when the needs of the team require.

Along with the process, I included another worksheet that was created by another UX’er within the team that really helped improve the big room planning process and allow the BA to pick up and hand over designs to the developers. To this I also created a worksheet that the designers PO, and BA can take a power point presentation and really try to define the problems we are trying to solve, and to determine ‘How might we’ questions that can follow us through the project. This would allow us to take this worksheet into an ideations session, where we would first confirm that our thinking is correct to the client, and start crazy 8’s off the back of this.

As a final step in the process I worked with the other designers in the squad (UX, content) to created a backlog of design ideas and features that we thought were missing. This allowed us to note down simple thing that might just help lift the usability in a certain area, to big features, or even areas the business requirements may have missed. We could then sit down with our PO and discuss priorities using MoSCoW to determine what should be focused on and what could go into a development sprint.

A side project to my squad work, was to help define and build a work book to help the different tribes pick up usability testing in a consistent manner. Here I used some templates that I had picked up and learnt from some UX researchers over the years. What I did here was try to define the workshops teams needed to do to first define the testing and get all the thoughts from the various teams of what they wanted to test and what they wanted to learns.

The next was to define a process or work board that could be used to both gather the data during the test, but also used to replay the key findings of the test to the in squad teams, saving on the time of creating big power point presentations. Although these would still be available for Business leaders.